"Our mission has always been to help animals. By providing people with the information and resources they need to take care of their pets and help animals in need, we try to help make the world a better place."   -David Bruning 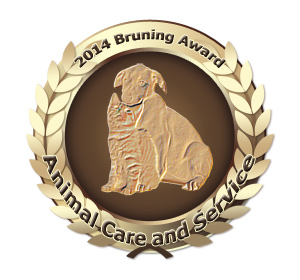 I have created an award to give to these people to acknowledge their dedication and hard work. Every year this page will be updated, hopefully with a bit of information about them and what makes them so special.

This is what the award looks like and will be available to the winners to display however they like. If you wish to see the fullsize image, just click the thumbnail on the left.

Showing our appreciation is the very least we can do to encourage people to continue working to help animals and protect our environment.

Hope for Paws is an animal rescue organization based in Los Angeles, California.

A little about them from their site www.hopeforpaws.org: “We rescue dogs and all other animals who are suffering on the streets and in the shelters. Our goal is to educate people on the importance of companion animals in our society.”

Their work saves the lives of animals who desperately need to find the kind, loving homes they deserve and the people at Hope for Paws will foster the animals they help until the right home is found.

Their latest rescue based on when this update was made:

I think we can all give a moment to appreciate for the work they do and if you are looking for an organization to support that deserves it, you can do so here. Every little bit helps 🙂

Wang Yan of China had his dog go missing back in 2012. While searching for the pet all over Helong town in Jilin province, his search eventually led him to a local slaughterhouse. While he didn’t find his animal what he saw moved him to take on a new cause.

Using his significant personal wealth to purchase the slaughterhouse, he converted it into an animal shelter – changing it from a place of pain and death to one of healing and hope.

Since then, he has spent over a million Yuan on the shelter and has saved over 2000 dogs from being slaughtered.

Every year there is an annual festival in Yulin, China where an estimated 10,000 dogs are killed and consumed every year. Often these dogs are stolen animals and are subjected to absolutely brutal treatment, sometimes dying in agony while crammed into cages awaiting their fate.

Often these animals are intentionally injured prior to being killed due to the cruel belief that pain enhances the flavor of the meat. Naturally this brutal spectacle is resisted by activists who do what they can to save as many dogs as possible. Market vendors are willing to sell the dogs to activists trying to save them, often at inflated prices, often taunting and threatening to hurt the animals if they aren’t paid. You can find more information on the festival here and here. 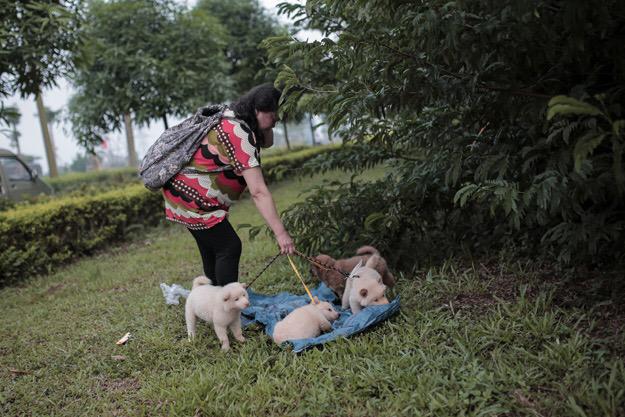 This year’s Bruning award goes to Yang Yuhua from Chongqing, China. Yang has saved over 130 dogs this year to protect them from the festival, and has been going above and beyond for over 12 years – she currently houses over 500 stray dogs on her dog farm where she cares for the animals.

Regardless of a person’s stance on the ethics of eating dog meat, these animals are still living beings capable of feeling pain. The manner in which these animals are treated is both grotesque and inhumane. The vendors promoting how this “festival” tortures animals should be deeply ashamed of themselves.

Every year there is a campaign to suspend the festival both at the festival as well as online (for example #StopYulin on Twitter), please consider giving your support to help stop the cruelty that this festival embodies.

Usually the Bruning Award is given to individuals, but this years award goes to the men and women working hard to protect the critically endangered animals: The Reserve and Park Rangers

Every year about $19 Billion Dollars in illegal wildlife trade occurs. Rhinos, elephants and other animals are facing extinction as every year their numbers drop. Three elephants are killed every hour, every single day. These numbers are simply not sustainable.

As we join together to try to limit and prevent poaching, it’s important to remember there are men and women that spend every day out in the wild trying to protect these animals. It is an IMPORTANT job, and one which is worthy of our respect.

Keep up the good work!

After tallying the votes that were made, which seemed to be primarily from Twitter users this year, this years award goes to:

Sea Shepherd Australia is a non-profit conservation organisation whose mission is to end the destruction of habitat and slaughter of wildlife in the world’s oceans in order to conserve and protect ecosystems and species.

Sea Shepherd Australia uses innovative direct-action tactics to investigate, document and take action when necessary to expose and confront illegal activities on the high seas. By safeguarding the biodiversity of our delicately balanced oceanic ecosystems, Sea Shepherd Australia works to ensure their survival for future generations.

After tallying the votes that were made, and there were quite a number of them so thank you to everyone that participated, we have 2 nominees that completely outnumbered everyone else, so for 2012 we have 2 sets of congratulations and thanks to be given out to the following:

Secondly, we also want to throw appreciation in the direction of the Barbi Twins (@Barbi_Twins). Your voters also said a great deal to support and recommend you.

From their website at www.twinbunnies.com:
“The Twin Bunnies Liberation Front or Twin BLF (formerly known as “The Kitty Liberation Front”) is an animal rights organization formed by Shane and Sia Barbi (“the Barbi Twins”) in an effort to promote awareness of every animal’s right to a safe and free life, support the promotion of companion animal population control through spay and neuter and trap and return programs (TNR) and to build public awareness of acts of animal cruelty both on the part of individuals and corporations. We are all “guardians of nature” and it is our duty to protect animals from harm.”